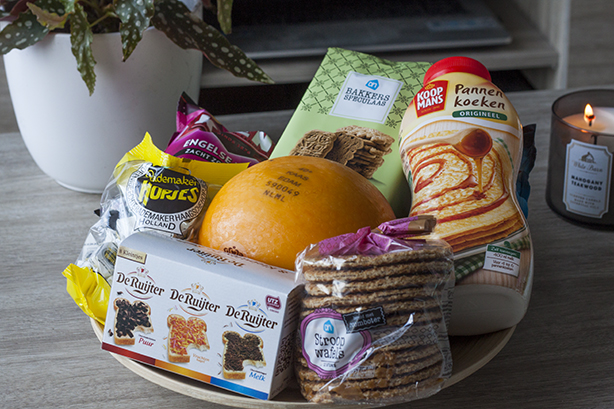 Sander’s boss is such a thoughtful guy. He always puts his employees first and I’ve never seen him without a smile. He was aware that I had Dutch exams to do but had no idea that I had finished them. When he found out that I had passed, he did such a generous thing by putting together a gift basket! It contained a lot of traditional and delicious items so let me share what we got in this Dutch Gift Basket!

Kaas Wheel
There are hundreds of cheese stores in Amsterdam and they’re hard to miss. Cheese wheels are quite popular among the tourists and it’s easy to see why. It’s delicious! The interesting thing about Dutch cheese, is that they come in a single flavor but are measured by their age. For example, young cheese has a fresh and gentle flavor while old cheese is dense and packs a punch. The cheese from this wheel is so tasty that I’ve been having some for every meal. It’s amazing in an omelette and even with bread and butter!

Black licorice
Black licorice, or dropjes, are a popular Dutch snack. Most of them are too strong for me, but Sander’s dad loves them to bits. In the basket came two different kinds, soft and sweet, and regular strength in coin form. If you’re familiar with American black licorice and want something stronger, I recommend trying some. It’s such a unique flavor and a staple in many Dutch households.

Stroopwafels
These delicious treats are two thin waffle cookies with caramel in between. They’re so popular that everyone knows about them. If you haven’t tried one yet I suggest you have it with a cup of hot tea or coffee. Place the cookie on top to warm it and then dig in!

Pannenkoekenmix
Dutch pancakes are thin, flat, and can come with a number of different foods baked in. Sander’s mom makes them with cheese and ham sometimes… They’re so delicious! We got some premix which just needs some milk added. These containers are convenient because all you do is all the milk, shake, and pour into the pan. It’s been ages since we’ve had some so I’m excited to make them again.

Speculaas koekjes
These Dutch cookies are similar to gingerbread men in taste and texture. They’re amazing to have when theres a cup of tea nearby.. And with the current cold weather we’ve been having we always have at least several cups during the day. It’s hard to stop at just one! And unlike gingerbread men, these cookies are available year round!

Vlokken
I’ve mentioned vlokken in a previous post but that doesn’t mean they aren’t amazing! It’s been ages since we’ve had them in the house. They contain too much sugar to have in the morning but Sander loves them. I enjoyed having them on toast around tea time (2pm) because they’re such an easy snack. It’s perfect for a day where healthy eating is on hold and sinfully delicious foods are in!

Hopjes Koffie Snoep
These are new to me but I recommend them for any coffee lover. It’s a hard candy that tastes like caramel coffee. It’s not too sweet and the coffee flavor isn’t overwhelming. I can see myself enjoying one after lunch or maybe after dinner. 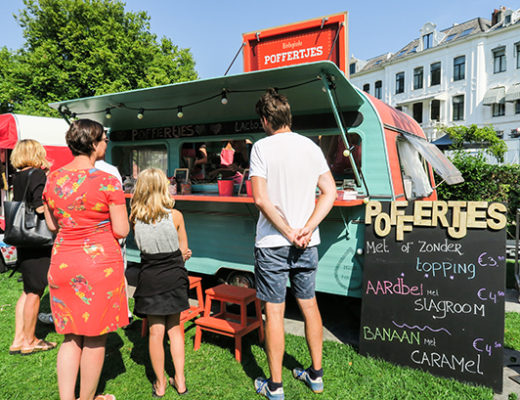