What’s so wonderful about Amsterdam is that there are hundreds of rotating museum exhibits to visit. From now until September 1, 2019 is one particular exhibit about Japan and its world wide influences. Cool Japan showcases some of the more popular topics that places Japan at the top when it comes to cultural interest. 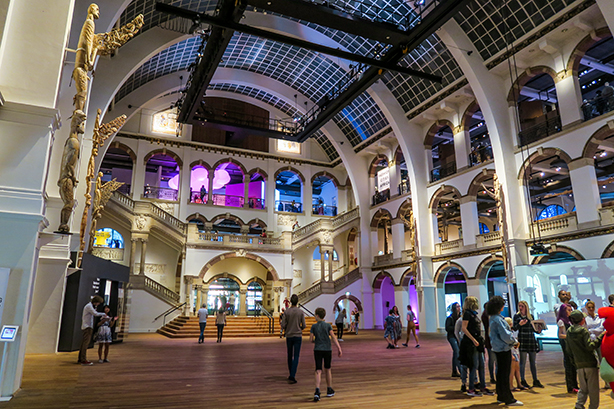 The exhibit covers a majority of the topmost floor in the Tropenmuseum. It features a ton of historical and interesting facts that cover the most popular chapters of Japanese history. We got to walk through pieces of the past and parts of the present for an overall look at why and how the Japanese became the fascinating culture that it is today.

We got to see some amazing pieces of old Japanese art. Much of it told stories of famous samurai warriors and their impossible feats. Other stories told about the charming lives that royalty lived.

We also got a brief lesson in how folklore lead the way to modern day stories commonly seen in Japanese animation today. It’s fascinating to see how years of storytelling never let up even after all these years. Stories about nobel heroes and warriors willing to die for their leaders are still strong today. Of course this is nothing new but the history behind such heroes tends to be dark and mysterious.

What was cool about this exhibit is that it showcased some scrolls that told a few of these stories. This method of storytelling eventually lead to picture books and the creation of Manga (comic books). What began as a simple way to pass on legends and tales of mighty warriors ultimately became a huge part of Japanese culture. I loved seeing the origins of such stories. There were old books that showcased how animals evolved into troublesome spirits and the main characters of so many fairy tales.

There was also a large reading room to showcase how expansive the Japanese literary scene is. From light novels (short novels) to Manga everything was available to view.

A lot of memorable characters were scattered throughout the exhibit too. It was fun to see how many heroes Sander and I could name. But of course this wasn’t all that was showcased at Cool Japan.

We also got to see the Kawaii side of Japan. It’s the long standing trend of being “cute” and is popular all over the world. There have been documentaries about this particular vein of fashion. While the Kawaii fashion trend covers over 50 different types of styles, the most popular ones were on display here.

Japan is also steeped in folklore. Every old culture has it’s fairytales but there was something about Japanese lore that interests me to no end. I love how every aspect of life should be treasured. I also love that there was a reason for everything. All things have the potential to be a home to a spirit and that idea is just so cool to me. There were also references to demons and ghouls that the Japanese believed plagued them. Like any ancient culture, the Japanese have deep roots in storytelling and fables. We got to see a few recreations of these demons in the Horror Room.

All in all I think the Cool Japan exhibit was a great time. We got to learn a few new things and consider the culture through a new lens. I would highly recommend visiting the exhibit while it’s still around!